The USDA World Agricultural Outlook Board (WAOB) is responsible for monitoring weather and climate impacts on domestic and foreign crop development. One of WAOB’s primary goals is to determine the net cumulative effect of weather and climate anomalies on final crop yields. To this end, a broad array of information is consulted, including maps, charts, and time series of recent weather, climate, and crop observations; numerical output from weather and crop models; and reports from the press, USDA attachés, and foreign governments. The resulting agricultural weather assessments are published in the Weekly Weather and Crop Bulletin, to keep farmers, policy makers, and commercial agricultural interests informed of weather and climate impacts on agriculture. Because both the amount and timing of precipitation significantly impact crop yields, WAOB often uses precipitation time series to identify growing seasons with similar weather patterns and help estimate crop yields for the current growing season, based on observed yields in analog years. Although, historically, these analog years are identified through visual inspection, the qualitative nature of this methodology sometimes precludes the definitive identification of the best analog year. One goal of this study is to introduce a more rigorous, statistical approach for identifying analog years. This approach is based on a modified coefficient of determination, termed the analog index (AI). The derivation of AI will be described. Another goal of this study is to compare the performance of AI for time series derived from surface-based observations vs. satellite-based measurements (NASA TRMM and other data). Five study areas and six growing seasons of data were analyzed (2003-2007 as potential analog years and 2008 as the target year). Results thus far show that, for all five areas, crop yield estimates derived from satellite-based precipitation data are closer to measured yields than are estimates derived from surface-based precipitation measurements. Work is continuing to include satellite-based surface soil moisture data and model-assimilated root zone soil moisture. This study is part of a larger effort to improve WAOB estimates by integrating NASA remote sensing observations and research results into WAOB’s decision-making environment. Submitted by: William Teng, NASA GES DISC (Wyle IS), [email protected] 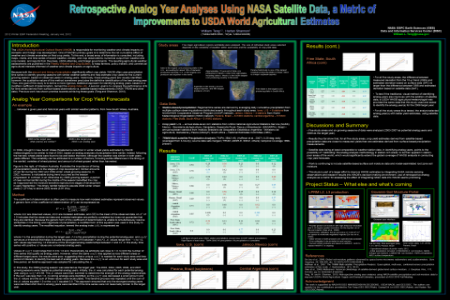