It takes huge amount of resources to master using geospatial analysis software tools. Even after mastering it, it is not uncommon for the users to have to refer to software documentation frequently for help in performing operations which are not carried out routinely. Ideally, a software should make it easy, especially for those who are already experts in the subject matter being studied, to perform operations without having to spend large amount of time learning the idiosyncrasies of the software. In this poster I will present some of the work that I am doing to create an Ontology based natural language interface to perform geo-spatial analysis. The system currently takes simple english sentences as input and turns the sentences into SPARQL queries which are applied over an RDF store. More complex queries could be build by combining several sentences together into a "paragraph". On receiving a query which is ambiguous, it searches for probable matches with the given query and ranks them for the users to choose the best match. This system gives a hint that it might be possible to build software for data analysis using natural language programming, at least in a limited domain. Some examples of natural language queries performed over Oceanographic Data will be presented. 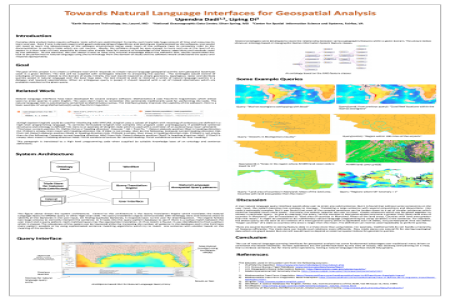