From interoperability to interactivity: a test of exploratory visualization with semantic web technologies

The flow from data to information to knowledge suggests us that, besides the interoperability, we also need interactivity of those geological map services in order to better understand the meaning of the contents of those maps and then make use of them. The interactivity here means a two-way flow of data and information between geological map services and users. Exploratory visualization is proposed here to support such interactions. Our understanding of exploratory visualization is that visualization can be used as an exploration tool throughout the research life cycle rather than just as an end product of scientific analysis.

The second pilot system [5] is a portal for providing formal background information of Golden Spikes. Golden Spike is the nickname for the Global Boundary Stratotype Section and Point (GSSP), which is a commonly agreed stratigraphic section that serves as the formal reference for a particular boundary on the geologic time scale. In this portal, we refined the geologic time scale 2012 ontology of the GeoSciML group [6] and loaded it into a triple store. We reused the d3.js-based visualization tool and Google Map as the user interface. We then referred to the website of the Geologic TimeScale Foundation [7] and the geological map services of various institutions (e.g., those from the USGS [8]) to develop exploratory functions, with which users can browser information relevant to the locations of GSSPs.

In summary, while the interoperability of earth science data is being improved by using service standards and by deploying intermediating schemas and vocabularies, interactivity between earth science data services and users should receive more attention. Our work shows that exploratory visualization supports the interactions between geological map services and users, ontologies provide powerful reasoning functions, and the Linked Data provides an environment for retrieve more data and information. In this work we focused on a single subject in earth science (i.e., geologic time) and we developed several exploration visualization functions with various data sources. We wish the exploration visualization can be tested and applied with more subjects of earth science data. 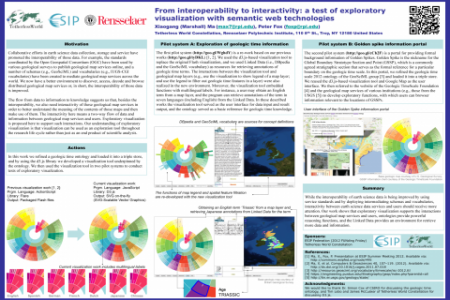