The current model for scientific publishing emerged centuries ago, and although the Internet has already had a huge impact on how science is done, formal discourse among scientists remains largely unchanged. The nascent future of publishing, as we see it, rests on four pillars: (1) an ecosystem of different kinds of scholarly products; (2) immediate and early access to work; (3) open review; and (4) reputation and recognition for a broader range of contributions, including reviews.

In order to help establish these pillars and drive cultural change in ecology, evolutionary biology, and the earth, ocean, and environmental sciences, we plan to run an experiment where scientists publish preprints and engage in discussion, review, and meta-review, and where we collect data from usage statistics and user surveys in order to improve how these interactions work. We developed an early prototype of a preprint website with a unified interface for reading, commenting, and upvoting/downvoting comments. Since then, other preprint platforms have emerged with similar goals and features, and, in order to avoid fragmenting the community, we are now seeking collaborations for the experiment. We have also developed a simple browser extension that makes it easier to simultaneously read and discuss research on PeerJ PrePrints. 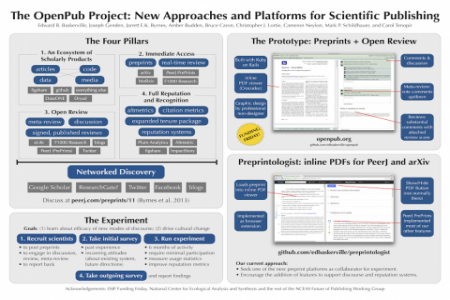