The Earth Observing System Data and Information System (EOSDIS) Earthdata Collaboration Environment (ECE) (https://wiki.earthdata.nasa.gov) has had several upgrades and additional features (plugins, etc) added since the its initial release one year ago. The ECE is a tool that is provided to both the general public and to the Earth science community for promoting interaction, collaboration and sharing of ideas and ongoing work within the EOSDIS community. Several of the spaces that are available to the public include the Global Imagery Browsing Service (GIBS), Digital Object Identifiers (DOIs) for EOSDIS, information about the Earth Observing System (EOS) Clearing House (ECHO), and the Earth Science Data and Information System (ESDIS) Standards Office (ESO), where users can find information on Requests for Comment (RfCs) and various standards being used within the NASA Earth science community. 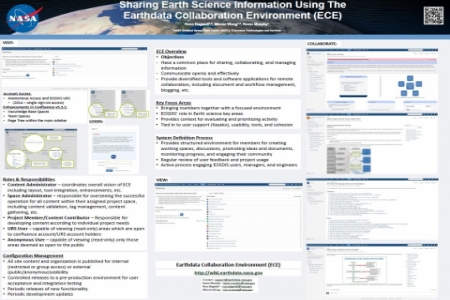