NASAʼs Earth Observing System Data and Information System (EOSDIS) is a core capability in NASAʼs Earth Science Data Systems Program. The EOSDIS contains 12 data centers each responsible for stewardship over separate scientific domains. A core function of the EOSDIS is to facilitate the discovery, access, and interpretation of data that is collected by the EOSDIS. NASAʼs EOS ClearingHOuse (ECHO) is a metadata catalog for the EOSDIS data centers, providing a centralized catalog of data products and registry of related data services.

Earth scientists can access EOSDIS data and services by using general or community-tailored clients that access ECHO's data and service holdings. WIST, the Warehouse Inventory Search Tool, has been the primary web-based client for discovering and ordering cross-discipline data from all of ECHOʼs metadata holdings for many years and has served the Earth Science community well. Working closely with this community, the ECHO team identified a need to develop the next generation EOS data and service discovery tool.

The ECHO Team based their client development efforts on the following principles:

Metadata plays a vital role facilitating data and service discovery and access. As data providers enhance their metadata, a userʼs search experience may also be enriched, as they are able to discover items of interest using more advanced search capabilities. Reverbʼs reliance on metadata provides a dynamic experience to users based on identified search facet values extracted from science metadata. Utilizing cross-dataset correlation and search based on provided metadata values, users can discover additional dataset that they may not previously have been aware of.

Data discovery and access is not limited to simply the retrieval of data granules, but is growing into the more complex discovery of data services. These services include, but are not limited to, services facilitating additional data discovery, subsetting, reformatting, and re-projecting. The discovery and invocation of these data services is made significantly simpler through the use of consistent and interoperable standards. Sample standards include the OGC and OPEnDAP protocols. By utilizing an adopted standard, developing standard-specific adapters can be utilized to communicate with multiple services implementing a specific protocol.

Through Reverb, users may discover services associated with their data of interest. When services utilize supported standards and/or protocols, Reverb can facilitate the invocation of both synchronous and asynchronous data processing services. This greatly enhances a users ability to discover data of interest and accomplish their research goals.

Extrapolating on the current movement towards interoperable standards and an increase in services, the ultimate goal is to provide a ubiquitous experience for users when discovering data. Services will become a natural part of data discovery, reducing users needs to be aware of the service that is facilitating their data access. The Reverb discovery tool provides a platform to shift the earth science data discovery paradigm. 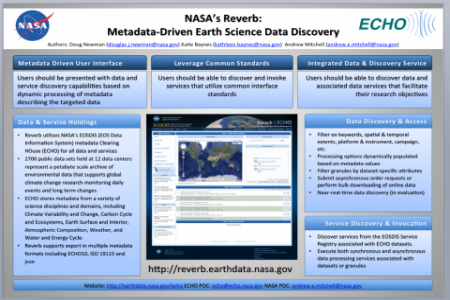