Spatial Analysis Of Sediment Persistence: How Tropical Cyclone Events Affect Sedimentation In The Gulf Of Mexico

Tropical storms and hurricanes are a common threat along the Gulf of Mexico coast. In the ten year period from 2000 to 2010, Louisiana, Mississippi, Alabama and the Florida panhandle were affected by 28 tropical storms, seven of which were hurricanes. Tropical cyclones have many impacts on the region including increased rainfall and flooding. These resulting flood waters carry large amounts of suspended sediments. These suspended sediments often migrate to the Gulf of Mexico coastal areas and are a factor in aquatic habitat health, water quality, conservation efforts, and commercial endeavors. This study assesses Gulf Coast areas most often affected by suspended sediments following tropical cyclones by utilizing the Sediment Analysis Network for Decision Support (SANDS) dataset, created from MODIS and Landsat imagery and provided by the Global Hydrology Resource Center. The results of this study will be used to map areas in the Gulf of Mexico where suspended sediments consistently occur following tropical cyclones in order to aid in decision-making processes. 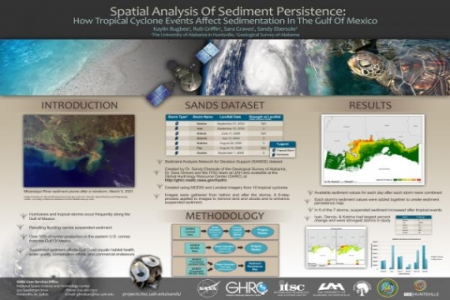