Rapid integration of information from diverse information sources plays a key role in responding to natural and man-made disasters. In the age of inexpensive fixed and mobile wireless sensors that can be worn by, be fixed to, or watch over almost anyone or anything, the number of these sources is growing explosively. Image and location sensors, as well as health and environment sensors worn by first responders, mounted on vehicles or drones, or rapidly deployed around an incident scene, are especially valuable in disaster situations. All too often, though, each set of sensors is tediously connected to its own proprietary collection system for a limited purpose, difficult to share or to integrate with other information sources. Even when accessible, sensor data has little or no value without contextual information. For example: A videocam shows a firefighter approaching a burning vehicle. Who is that firefighter? What assets and risks are nearby? Context requires integration of sensor data but also needs the metadata that can define what a sensor is actually characterizing.

The Internet of Things (IoT) provides a conceptual framework for deriving an overall picture of a real-world situation from myriad sensing devices, but still lacks standard mechanisms to hook sensors together, discover what sensors may be available for what purpose across multiple organizations, then uniformly task and leverage their outputs. Fortunately, OGC Sensor Web Enablement and other standards already provide many such mechanisms, including for example SWE Common datastreams, SensorML, and the Sensor Things API. The IMIS IoT Pilot demonstrated how open standards could be used to self-assemble, integrate, and exploit IoT sensor networks for disaster response operations. The networks were formed around constellations of Sensor Hubs that connected proprietary sensors to uniform interfaces, making them globally discoverable and accessible by first responders, commanders, and analysts alike. 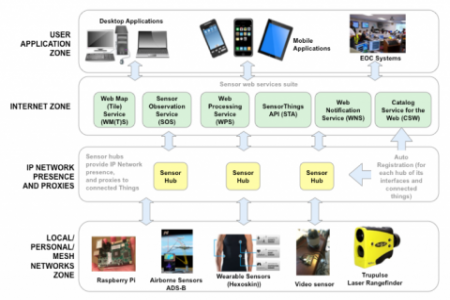